Mark McGwire - a plight of a tainted man looking for redemption 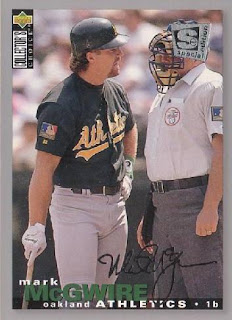 I'm not so much worried about the details and what Mark McGwire may have not said in his statement or to Bob Costas in their MLB Network interview - regarding his use of steroids and PEDs.

With McGwire's admission, at least now there is finally some transparency - we don't need to know what McGwire was using and when he was using. Just getting him to admit to using steroids and PEDs means a whole lot more than if he'd continued to sit back and be ignorant of his situation.

Of course, McGwire needed to talk about the past, in order to move ahead with his new position as hitting coach with the St. Louis Cardinals - I believe he sincerely wants to be the best hitting coach in the Major Leagues and he doesn't want any distractions from the media.

I'm happy McGwire confessed because now we can go look at his numbers and make our own conclusions as rational thinking baseball fans - to whether or not PEDs helped him with his God-given ability to hit a baseball.

Just like with Alex Rodriguez' admission, there is some timeline of PED use established and those who can vote for players to be inducted can kind of figure out where McGwire's numbers stand - with their own subjective standards of what is a great player and what is a Hall of Famer.

Admitting his use of steroids and PEDs might serve as closure for McGwire - he might want to see it that way.

However, if McGwire doesn't say more than what he has already admitted to - he still has a long way of garnering the support of anyone who can legitimately argue his numbers as Hall of Fame quality and can actually vote on the matter.

Off topic - can you send me an e-mail - I would like to get out a Spot the Sig! Prize Package to you sometime - My email is in my profile.