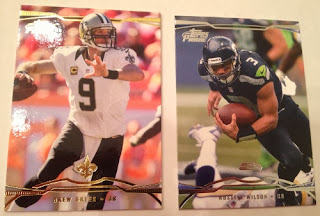 Drew Brees is sort of the gold standard in my book as far as active NFL quarterbacks are concerned - he seems like an accessible, down to earth superstar who is a pro all the way.

Maybe it's the idea that he doesn't necessarily tower over people or maybe the commercials he's been in that shows him mostly as a regular guy and father - maybe it's because of a 'cool story bro' moment I had with him at a golf tournament in Lake Tahoe back in 2006.

I was getting him to sign a card inside my autograph book - after signing my card, he took an extra moment to look at my other cards and I thought it was a little odd for whatever reason, he was interested in looking at the Vince Coleman card I had affixed on there.

As far as Russell Wilson, I've finally found one, lousy common card of his in the quarter box - I don't have an NFL fantasy team but for whatever reason, I randomly end up checking NFL box scores on ESPN to see how certain players like Wilson have performed.

He's become a little more established in his second season - but he is still a tiny guy having to scrap through and prove himself from week to week.