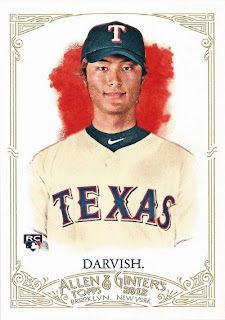 In recent years, the Angels are still looking up at the Rangers, so I can't really talk smack - I do feel like the Rangers have had it tough between losing the 2011 World Series, committing a choke job in losing the American League West title in 2012 and losing the Wild Card playoff game against the Tampa Bay Rays this past season.

It seems like manager Ron Washington can't get a break - it seems like he is the one put on the firing line rather than be considered one of the main guys who is responsible for the team's overall success, regardless of their shortcomings.

Yu Darvish might be the best pitcher in the American League with the potential to throw a no-hitter every time he is making a start - my in-person autograph white whale, I think he'd be the bees knees if he actually acknowledges and signs for me sooner than never.

Adrian Beltre's numbers have stayed consistent playing with the Rangers and besides his bat, he continues to be a great defender as he enters his mid 30's - he is making a late career push towards the Hall of Fame, something that didn't seem quite possible when he is a just an OK player and quite a disappointment in Seattle.