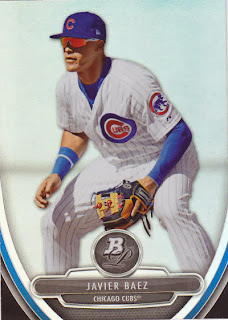 I could care less about the Cubs, their curses and their heartbreaks but they have some nice prospects that maybe worth watching sooner than later including - Javier Baez, Kris Bryant, C.J. Edwards, Albert Almora, Jorge Soler, et al.

I didn't really know who Bryant was a year ago [at the University of San Diego], but while he's not the 'official' Cubs No. 1 prospect entering the 2014 season - he looks like the next great hope for Cubs fans he's on the fast track to get to the Major Leagues sooner than later with a polished approach at the plate and power potential.