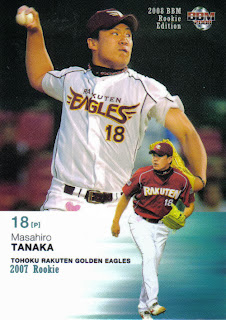 I found a couple of these cards in my A-Z archives / cardboard morgue - these were given to me by my friend for the 2009 World Baseball Classic as part of an assortment of cards consisting of players who would have appeared in that year's tournament.

The cards will be waiting for a new home when Tanaka signs with a Major League team - it maybe tough getting this guy to sign the actual cards, because there will be a lot of hype [though I've read bits and pieces saying his stuff just isn't as good as Yu Darvish's] for the next impact player coming from Japan.

Presumably someone of Tanaka's caliber will be locked down to some sort of signing contract - if you want an autograph, you'll have to buy a case of whatever Topps / Bowman product is out there and hope to pull a certified autograph card.