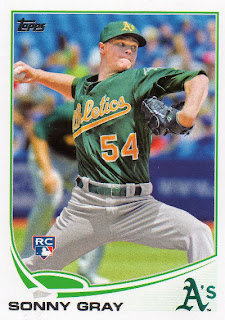 It seems like GM Billy Beane has found a formula for building a MLB team in Oakland that can contend for the playoffs - even if they aren't as good as other teams when they get into the postseason.

The A's are a division rival of the Angels and I don't particularly care for their recent success - still 10 or 11 years after Moneyball came out, it's impressive how bit players as well as natural talents [as far as pitching is concerned] have been cobbled together by Beane and his staff to help the A's win two consecutive American League West titles.

I didn't know much about Sonny Gray except having a few of his cards and thinking he might be just another midlevel pitching prospect - but after having a fine debut season and a postseason start to remember, the slightly built flamethrower will dictate where the A's will go in 2014.

If he gets hurts and/or is ineffective, the A's might not get as far as they've been the past two seasons - if things falls into place however, Gray might be the type to light the league up on fire and might be my dark horse candidate to win the 2014 American League Cy Young.