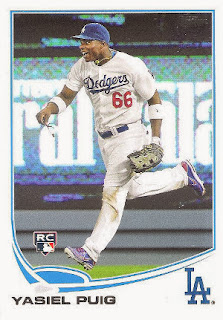 I respect the Dodgers' history and casually check out what current Dodgers teams are doing - though my rooting interests sticks with the Angels.

In recent years, outfielders Matt Kemp and Andre Ethier have been banged up [especially Kemp] and have not played as good as expected - now either one maybe trade bait this off-season, though each is still owed a lot of money.

I don't always watch the Dodgers, but when I do, I prefer Yasiel Puig - I love the energy Puig plays with whether he is at bat, on the bases, on defense and in the dugout when he is goofing with his teammates.

The caveat however is for better or for worse, he really looks like he isn't in the same planet - it's hard to watch him when he looks like a Little League player who doesn't know quite know where he is at the plate, on the bases or on the field.