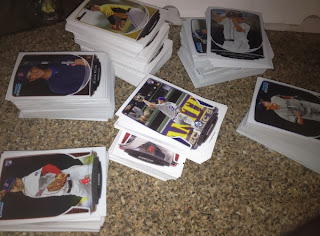 I picked up a hand collated paper set and a Chrome set of 2013 Bowman Draft so I double up on the number of base cards for each player on the checklist - much of my baseball 'off-season' as a fan / autograph collector is spent trying to reload as far as picking up random cards, unopened products, assorted hand collated sets, et al within a budget.

I want to pick up a couple of unopened boxes of 2013 Bowman Draft but don't like the idea of spending $120-$150 and realizing I'm still missing maybe 15-20 random base cards - at least with a couple of sets in-hand, I don't have to worry about wondering if I have a card for someone.

The part I don't always like is trying to sort the cards and finding out where they belong - it's hard to look through these cards individually and feel like these cards are more than just little pieces of cardboard.

Part of it is not knowing who most of the players are and the idea these guys may never heard from unless it's the guys who make it to the Major Leagues - a part of it is the idea I have to put these cards away ASAP without going through each card like I would perhaps cards I pick from a bargain bin / dollar and under box.

The sorting gets tedious but I guess it's easier than actual box breaks, where I'm compelled to list everything I get somewhere - then have to go and separate base cards from common inserts / parallels to actual pulls, before sorting many of the cards into 'team sets' I have for my baseball autograph seeking adventures.