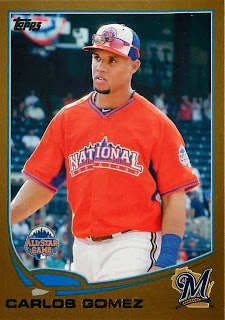 The emergence of Ryan Braun and Prince Fielder made this team relevant through the late 2000's but Fielder is long gone and the once golden Braun has stumbled because of PEDs - Carlos Gomez and Jean Segura really makes the Brewers go these days, even though just a few years ago, I thought Gomez wouldn't be able to establish himself as a regular player in the Major Leagues.

Gomez had sort of his breakout season in 2012 where I kind of noticed for a guy putting up some bad stats [20 walks / 98 strikeouts / .260 batting average] - he played with a certain fire and if I was rooting for a below average MLB player, it might be him.