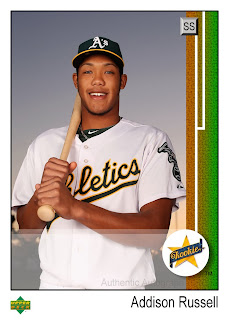 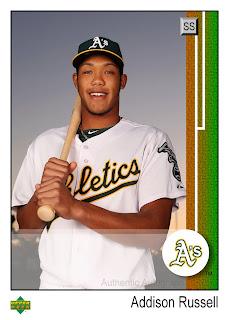 Shortstop Addison Russell was drafted in 2012 by the Oakland Athletics and in his first professional season in 2013 - reached AAA for a cup of coffee after spending much of the minor league season in A-ball in the California League.

I downloaded a 1989 Upper Deck template posted on Sportscollectors.net, the one I used to create a Michael Roth card - I found an A's logo online and an image of Russell I liked, so I could slap things together.

I added a version with the 'Star Rookie' logo - as a 'late edit' to reflect the idea that there is some anticipation to see what this guy can do in the Major Leagues in the near future.

Unlike the Roth card, I put the Russell customs together on Photoshop - after I had found out in a SCN message board post, that there was a version of the image editing program available online for free.

Awesome custom! I look forward to seeing what he can do at the MLB level. Go A's!

Any chance you could post/send the template. Can't find it anymore on Sportscollectors.net.

I deleted it from my HD a while ago - sorry.